Patrick Nnaemeka Okorie, better known by his stage name Patoranking has broken a record as he becomes the first Nigerian act whose debut album ‘God Over Everything’ emerged on the coveted Billboard Reggae Charts at the number four spot, less than two weeks after its release.

The multiple award-winning Reggae/Dancehall singer last Saturday held a media and stakeholder event to launch his debut album titled God over Everything (GOE) at the Best Western Premier Hotel, Accra.

The album has 15 tracks featured, these are:

Speaking to patrons about his latest single, No Kissing featuring Sarkodie, he said:

“It was a song Sark did his magic on and I want to take this opportunity to thank him for the love he showed me. Without a doubt, he is one of Africa’s best and I have never underestimated what he can do on a track.”

Reacting to his GOE album making its grand entry on the Billboard Reggae Charts, he took to his Instagram handle and posted:

“God Over Everything ???? Thankful #GOEtheAlbum”

God Over Everything ? Thankful #GOEtheAlbum 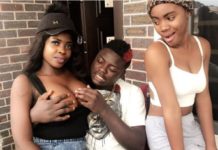 MzBel To Provide free Healthcare To Over 2000 Ghanaians On May...

Behind The Scene Scintillating Photos of the YOLO Stars